The Nigerian Polytechnic Students has appeal to the Federal Government to resolve its differences with the Academic Staff Union of Polytechnics, (ASUP) and end the seven-month-old strike by the lecturers.

The call was made on Thursday by the President of the Students Union Government, (SUG) of Federal Polytechnic, Bauchi, Malam Abubakar Bako.

Malam Abubakar Bako, told the News Agency of Nigeria, (NAN) that the lingering strike by the lecturers was having a toll on the students hence the need to end it and prevent idle polytechnic students from taking to crime. 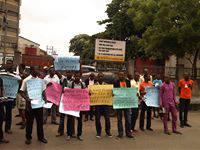 He said that the strike, if not resolved, could force students into social vices due to idleness and frustration.

“The continued face-off between our striking lecturers and the federal government is becoming worrisome with no call-off date in sight.
“We are appealing to the warring parties to have sympathy on us, settle their differences and allow us to go back to school and continue with our studies,” he said.

Bako said that a two-year diploma programme now runs between three and four years due to incessant strikes.

He said that the ongoing strike had denied eligible students from participating in the compulsory National Youths Service Corps scheme.

He said that the students were in support of ASUP’s call for a review of the Polytechnic Act to remove the disparity between Higher National Diploma Certificate and University degree.

“We are also in support of the union’s struggle for the establishment of a National Polytechnic Commission and the need to improve funding for education in the country,” he said.

The SUG president appealed to the federal government to implement the 2009 agreement it entered with ASUP for the development of the education system in the country.

He, therefore, urged President Goodluck Jonathan to intervene in the face-off as he did with leaders of the Academic Staff Union of Universities.