The latest report reaching us reveals that the Academic Staff Union of Polytechnics, (ASUP) members has vowed not return to classroom.
According to the information reaching us, the polytechnic lecturers as vowed not to return to their classrooms until the union’s demands are met by the Federal Government, (F.G). 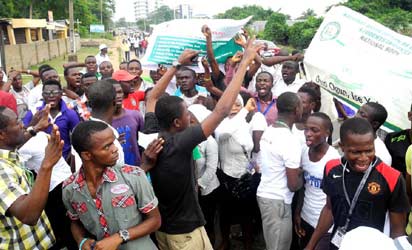 The ASUP Members made this declaration yesterday after a National Executive Council, (NEC) meeting of the union in Abuja.
In an interview with Vanguard Newspaper after the meeting, the ASUP President, Dr. Chibuzor Asomugha said: “The entire country is worried about the situation.

But the Federal Government does not seem to care. The ASUP-NEC has rejected the government’s offer to pay the arrears owed us since 2009, if we call off the strike.
“There is no seriousness on the part of the Government to negotiate any of the issues.

Before we suspended the strike in July 2013, Government picked four of the 13 issues from our 2009 agreement and said those issues would be handled in two weeks.

“Union suspended the strike, and gave Government a one month time frame to resolve these issues.

It was not until ASUP resumed its strike in January that the Federal Government commenced Needs Assessment and completed the constitution of the governing councils for federal polytechnics.”