The Movement for the Actualization of the Sovereign State of Biafra (MASSOB). We are waiting for the actualization of the rising sun. When? We do not know. But it will definitely take place in the near future – Probably 4 years, 40 years, or 400 years from Today. #1 The agitation of Biafran has nothing to do with Hydrocarbon/Crude Oil producing states in Nigeria with huge natural gas reserves, not forgetting the enormous untapped coal deposits in Enugu State!

#2 Biafra is not land-locked. It has numerous access to the sea, including through the River Niger.

#3 Biafra entire population is about 35 million people which is greater than the population many advanced countries in Western Europe, including Switzerland, Luxembourg, Belgium, Holland, Austria…etc

#4 Biafra does not or in any form signify war, violence, armed struggle or any sort of physical confrontation. BIAFRA IS NOT WAR! It simply means political, economic and socio-cultural freedom from a feudalist State ruled by terrorists and Jihadists.

On the 20th of October, 2015, the Indigenous People Of Biafra (IPOB) in Igweocha (Port Harcourt), held a massive peaceful protest to demand the immediate and unconditional release of her IPOB leader, Nnamdi Kanu. 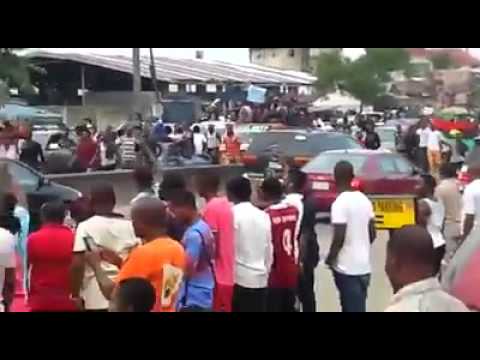 #5 Biafra is not a call for massive exodus to Igbo land. Put differently, every Igbo or Biafran must not live in Biafra land. Those who wish could still maintain their residency wherever they are as well as own properties anywhere in the world, including Lagos, Abuja, Kaduna, Kano, Abeokuta…etc.

#6 Independent and sovereign Biafra will never translate to loss or forfeiture of landed properties of her citizens in Lagos, Abuja or anywhere in Nigeria. There are many domestic and international treaties, conventions and laws that protects Assets of non-citizens everywhere in the World, that will apply appropriately.

Ijaws, Ogonis, Ibibio, Anangs, Efiks, Ogojas, and host of other ethnic NATIONALITIES shall possess the privilege to decide whether to tango politically with their Igbo brethren or go their own separate ways.

Biafra is a train of peace and liberty. A desire for liberation from institutionalised stumbling blocks like quota system and federal character principles in Nigeria’s quasi-unitary society.

It is a movement against internal colonialism, tribal gang-ups, economic marginalisation and political subjugation of Igbo and her minority neighbours. #9 It has nothing to do with hate, bigotry or ethnic chauvinism. Just a desire to live in a healthy society where your tribe, tongue, religion or creed does not define who you are or how far you would go in your career!